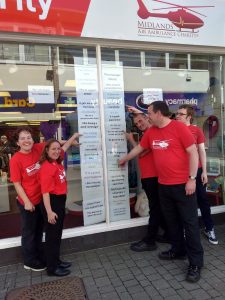 Michael has gone from strength to strength since he started his placement at the Air Ambulance charity shop in Wellington. His Manager, Emma, has been extremely impressed by his progress and said:

“Michael has indeed fit in fantastically with the team. He is cheerful and even cheeky at times! His confidence growth is far beyond my expectations which is brilliant to see. Each day he comes in, he has his little area that he looks after, he knows what to do and offers his support to other team members, particularly now he has mastered printing out price stickers – not many volunteers do that. At the close of day again he knows his/the shops routine, keeps me updated with what he’s doing and checks in with me if there is anything else I need doing. This demonstrates his ability to work alone and as part of a team.”

Michael started off with soft toys to see how he got on and did so well that he now looks after the whole toys section which is an achievement for him to be proud of.

Michael has made comments such as: “I was right when I said if you love what you do it doesn’t feel like work” and said that he wanted to come here even though it was half term.

Emma is so pleased with Michaels work ethic that she has even offered him more afternoons at the shop.

Emma isn’t the only one that has seen the benefits of this internship. Michaels Mother has also seen the positive impact it has been having. She said:

“Michael is doing really well at the Air ambulance shop, we are really pleased especially as he didn’t want to do it! Now I don’t want it to end; he is progressing really well, I’m hoping it will continue even without the help of Hazel and Chris which I know Michael has bonded with, they have been amazing with him.”