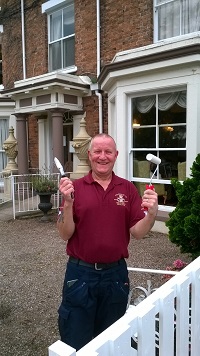 An ex-serviceman suffering from mental health has now gained employment, thanks to a new project which helps veterans get back into work.

The ‘Home Straight’ – Supporting Veterans into Employment project, provided by our Supported Employment Service and charity Walking with the Wounded, offers individualised support in finding the right job for each person, as well as time-unlimited assistance in the job, to both the veteran and the employer.

The scheme helps veterans to gain the skills and qualifications necessary to develop new careers outside the military – providing long-term security for themselves and their families.

The following is an account about Kevin’s experience and how he came to seek help and support through the Veteran’s project.

‘Kevin had enjoyed his time in the Forces but wanted to embark on new and exciting challenges. He joined the Northumberland Fusiliers (TA) on discharge from the Regular Army, while he settled in to civilian life comfortably.

Kevin went onto become a maintenance manager at a grammar school – a role that he thoroughly enjoyed. Life was good for Kevin for many years after discharge, he was content; he had a great job and a happy marriage. Unfortunately this changed when Kevin was involved in an incident one day that would leave him injured and traumatised without knowing where to turn.

As a result of the trauma, he soon became depressed and anxious about how his life seemed to be slipping away from him. In the process, Kevin was forced to give up his job – it felt impossible for him to return as he would be haunted by flashbacks on such a frequent basis. This lead to him drinking increasingly which resulted in the breakdown of his marriage.

After several months Kevin made the decision to contact his local Community Mental Health Team (CMHT), who went on to put him in touch with the Veterans Mental Health Network. With support from the two agencies through counselling sessions and therapy, Kevin’s mood slowly began to lift enough for him to drastically cut down on drinking.

Months later, Kevin’s therapist got in touch with our supported employment service, who work with Veterans charity, Walking with the Wounded to help ex-service men and women into civilian employment through their ‘Home Straight’ project. Kevin had made huge progress and was keen to get back into work and we were happy to help.

With the help of one of our Employment Mentors, Kevin finally felt like he was getting his life back and was well enough to complete job applications and attend interviews. He had several interviews where he disclosed his mental health issues to the potential employer – stating that with the help of medication, therapy and his Employment Mentor, his lifestyle had improved drastically.

“Without the help of the mentors on Home Straight I would not be in the position I am today. They helped build up my self-confidence and my belief that I could improve my life. I’m made up with the work they do and have done for me. My life has turned round and I am able to discuss my past without fear of returning to my old ways. I’m more positive because of the help they and the mental health team have given me…I know I’ll have the support as long as Enable are around.”

Kevin was eventually offered employment in a local nursing home. He made the brave decision to disclose his mental health needs which has allowed the employer to fully understand and support him in his return to work. Kevin has also seen improvements in other part of his life – he and his ex-wife are now talking on a regular basis and are slowly rebuilding their relationship.

“Walking with the Wounded are doing a terrific job in helping Veterans back into employment. Having a job I enjoy and look forward to going to certainly helped me get my life back in order.”

Kevin says that taking the first step and seeking help was the hardest thing he has done but now looks back and agrees it was also the best.

“I would like to thank Kevin for being courageous enough to tell his story and commend him for gaining the strength to seek help. I hope his story resonates with other Veterans who may have experienced trauma and lets them know that there is light at the end of the tunnel. Help and support is here to for them to get their life back on track.”

If you are a Veteran seeking employment or if you are a business interested in employing a veteran contact us.