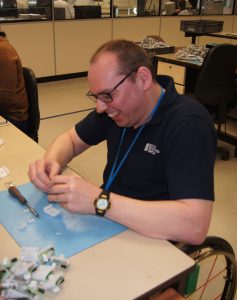 Robert is a person with a passion for life and the drive to achieve. The fact that he was born with cerebral palsy affecting his legs has never deterred him from trying his best and he is particularly proud to have represented his country as a member of the English swimming squad.

He also talks with great pride about his job as a Shop Floor Assembler with Static Systems Group based in Wombourne, and how from the outset he was taken on as a fully-paid employee with a ‘proper’ job.

Robert, 39, was living in a sheltered housing scheme prior to gaining paid employment but now has his own tenancy where he lives independently. As Robert is a wheelchair user, Static Systems had to make some small adjustments to his workplace at workstations. Robert’s confidence has grown significantly; he is now part of a team within the workplace, enjoys meeting new people and has a good work-life balance.

The Road to Paid Employment
Initially, Robert considered exploiting his natural sporting ability, studying BTEC Sports and Recreation, with the intention that this would lead to a fulfilling career.  On leaving college he gained work experience in a leisure centre.  However, at the end of his placement Robert wasn’t sure if this environment was really for him. In 2000, Robert contacted Penn Hall School in Wolverhampton where he had been educated some years earlier.  The school took him on to assist the swimming teacher whilst he evaluated his options.  After six years Robert had made his decision.  He wanted to do something totally different.

Despite his positive attitude to life, a friendly personality and having obtained a driving license in order to be able to travel to his place of work, finding paid employment proved to be a challenge.  He spent the next ten years looking for a job.

Robert’s social worker put him in touch with Dave Pyke at Enable who helped him to explore his options.

The question: ‘What does your mum do?’ changed Robert’s life.

Robert’s mum, Lorna, is a long-time employee of Static Systems who manufacture electronic equipment for the health service, employing around 200 people.  The thought of working in a bench type environment as his mum does, appealed to Robert and seemed to offer the potential for job fulfilment – although initially Robert was a little concerned that he wouldn’t be able to keep up to speed with others.

Dave approached Static Systems on behalf of Robert and an induction was arranged in order to give both Robert and the company a chance to assess each other.  Robert passed with flying colours – and so did Static Systems.

Robert was initially offered a three week trial and then given time to reflect on whether or not this type of work was for him.  He decided that it was and in January 2017 he was offered a rolling 3 month contract with the promise that it would be renewed as long as both Robert and the company remained happy. After only five weeks Robert had proved himself capable of the work and was offered a permanent contract.

With a big smile Robert comments: “I thought I would work my three months and that would be it. When they offered me a permanent position I was quite shocked and couldn’t believe what had been said to me because I didn’t think I would get taken on.”

Robert, who particularly enjoys the soldering element of his job, was initially slower than anyone else to do things, but over time he caught up and has shown an aptitude for this type of work.

“I was asked if I would like to try soldering. I said I would give it a go. It was a skill that I hadn’t tried before and I wasn’t sure that I would be able to do it, but happily they were pleased with my work.”

Payment from Day One
Static Systems is an equal opportunities employer. Managing Director, Adrian Turner, on learning of Robert’s employment with the company insisted that he was paid from the outset; finding it unacceptable to expect – as many companies do – persons with disabilities to work without providing monetary remuneration in return.

“We intend that Robert, where practical, will be treated exactly as any other employee, although it has obviously been necessary to implement a number of minor changes to accommodate his wheel chair. For example, we have made some adjustments to his work bench, given him his own parking space and a locker at low level – all of which we are happy to do to accommodate such a hardworking and pleasant employee.”

Robert’s mum is delighted with the support given: “I’m really pleased for him. The job has done him the world of good. The company has realised that he isn’t academic and has given him all the support he needs. I can’t praise Static Systems and Enable enough.”

She goes on to say: “There was a meeting with Mr Turner who listened to the way things are usually done.  Then he said: No, that’s not the way it’s going to be. If he is working here we will take on the responsibility for his training and wellbeing, and they have.”

Robert adds: “I was supposed to have a mentor from Enable with me for six weeks, but Static Systems said they didn’t want to do that. They would like to get me on a bench and be part of the team. They wanted to give me a proper job.  Now Dave just pops in to ask me what I’ve been doing and check that I’m okay, and he’s on the end of the telephone if needed. I don’t need the extra support and I’m pleased that this has been acknowledged.”

One of the Team
Under the supervision of Wendy, Robert works on ‘Bench No. 5’ alongside Ann, Diana, Sher and Mal, where he is treated as a fully integrated member of the team.  His colleagues find him a pleasure to work with and comment that he is always in a good mood. Ann in particular looks out for him and if required will offer assistance.

Robert, who doesn’t like crowds or to be too close to other people, said: “It’s not what I expected. I thought it would be a louder environment with more hustle and bustle. I like the atmosphere because it’s not too much.  It’s a nice place to work.”

Wendy says: “He is very conscientious and has fitted into the team marvellously. He’s a gem to have on the shop floor; he’s just so happy all the time. He is, honestly! There’s nothing bad you could say about him. Working here has given him a purpose in life and it’s clear to see that he has grown in confidence. I’m really glad we’ve given him this opportunity.”

An Independent Future
Robert’s mum said: “It’s unbelievable the difference working at Static Systems has made to him; his self-confidence has just grown and grown.  Until recently, Robert lived in sheltered accommodation, which had 24 hour attendance.  But as he has become more independent, he doesn’t want someone checking up on him all the time. Robert aspires to live an independent life.  He now has his own bungalow a short distance from where we live, and having this job is the icing on the cake.

“He’s still full of it when he gets home.” And jokes: “He even tells me how to do my job. I never get a break from him now!”

Robert wants it to be known that, whatever happens in the future, he’s glad that Static Systems stuck with him and for the help given by Enable. He would like to thank them very much.

Opportunities for Others
Philip Marsh, Static Systems’ Manufacturing Director said: “Robert’s doing brilliantly. The thing that struck me when he came to see us was his enthusiasm, despite the fact that he hadn’t worked for 10 plus years.  We just had to give him a chance and he’s proved himself really well. He’s picked up the work quickly and we are pleased and happy that we have now given him a permanent position.

“His soldering skills are very good, and we have had very positive feedback from the people working with him. He’s adapted really well and seems very happy in what he’s doing. It’s good to have someone who wants to work and to be able to give him the opportunity.

“If there are other people like Robert, these are the people we want. I would happily give them the opportunity.”