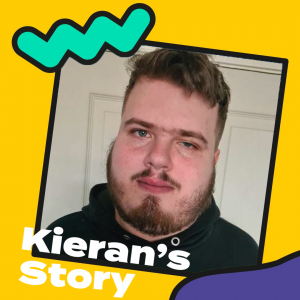 During the pandemic, many businesses and organisations were faced with sudden and unexpected changes to the way they worked. For Tim Shrosbree, Community-Led Housing Enabler at Right Home, Right Place, the impact was immediate.

Right Home, Right Place is a Shropshire Council-led initiative which runs surveys in each of Shropshire’s towns and villages to identify hidden housing need. When residents complete these surveys, their local parish council relies on the results to make decisions on whether new housing is needed, so the timely inputting of survey results is crucial.

As the pandemic progressed, some members of Tim’s team were assigned to other urgent projects, leaving him with a backlog of important housing data to input. Needing support, he approached Enable to see if they could recommend anyone – and they had the ideal candidate in mind.

Kieran, at the time a 20-year-old student at North Shropshire College, had been looking to gain work experience; he joined Right Home, Right Place on a Supported Internship in March 2021. His placement couldn’t have been better timed; with the support of his Job Coach, Kieran very capably helped to bring all the housing survey results up to date.

“He was absolutely fantastic, and I don’t know what we’d have done without him,” says Tim. “He’s brought a great deal of enthusiasm to the team because he’s so keen to learn, but on a practical level it’s also allowed us to clear a backlog which was essential for updating parish councils on the housing need in their area.”

At the end of Kieran’s internship, Tim realised there was an ongoing need for admin support and advertised for an apprentice. Kieran applied, along with many other candidates, and after interviews,  Tim and the interview panel felt Kieran would be the best fit.

“Having worked with Kieran, we really hoped he would apply and be successful,” says Tim. “But to make sure it was fair, we had to advertise the apprenticeship publicly and give others the opportunity to apply. At the end of the day, Kieran was by far the most capable and we were delighted to offer him the role purely on merit.”

Kieran officially joined the team in February 2022 as part of his Business Administration apprenticeship at North Shropshire College, working at Right Home, Right Place for three full days each week. Day-to-day, he inputs housing need survey data, gathers the latest HomePoint Housing Register figures to share with his colleagues and helps the team with admin.

“Since starting my first job here at Right Home, Right Place, I’ve learned so much about housing, the council and Shropshire as a whole,” says Kieran. “I’ve also discovered how much work is put into planning for new housing to be built. It’s been a great learning experience.

“The thing I enjoy most is meeting my colleagues once a week in Shirehall so that we can work together and socialise at lunchtime. That’s a really nice benefit because it’s a chance to get to know the people I speak to on video calls. And no two weeks are the same – there’s always variety. I’ve been given the best opportunity of my life, and I don’t intend to waste it.”

Kieran’s confidence has grown substantially since joining the team. When he first began his internship, Kieran’s Job Coach had explained that he may struggle on camera during video calls as he was fairly shy, but he’s now one of the most lively, sociable and involved members of the team.

In terms of corporate benefits, Tim believes taking on staff through Enable is one of the most cost-effective and beneficial things any business could do. Since Enable’s internships are government-funded, and Kieran receives additional funding to support his needs, Kieran initially came to Right Home, Right Place at no cost, and now receives above minimum wage.

“I’d urge any business in Shropshire to connect with Enable,” says Tim. “As well as being a good business decision and a great way to get additional support, it’s an important chance to diversify your team, demonstrate your role in the community, and create opportunities for those leaving school or college who have a tremendous amount to offer.”

10 wonderful ways parents can benefit from the Step Up Programme

Phoebe became more secure in herself by learning the ropes in her supported internship and is now confident in her part time job in WHSmith!!! Congratulations Phoebe!! https://t.co/3Yn9c5djqs
View on Twitter
0
0